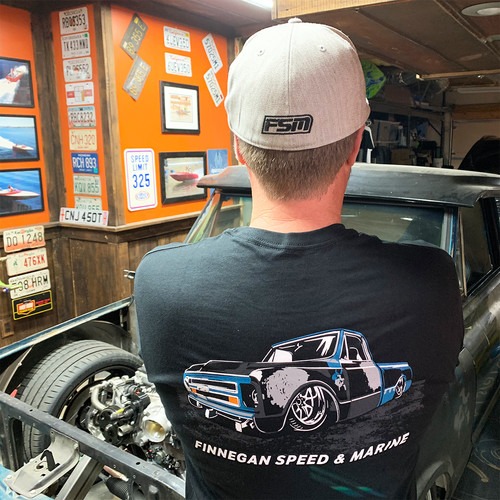 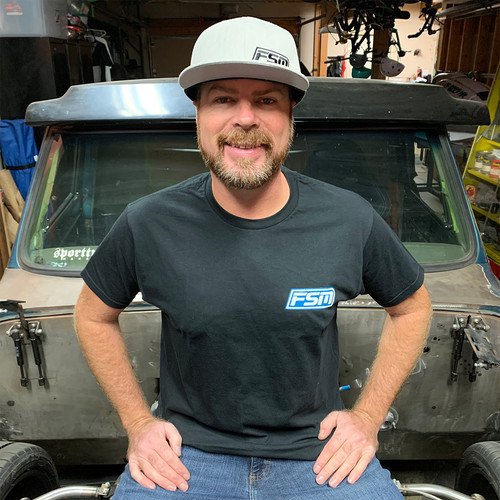 Shipping Info ▾ Size & Product Details ▾
$2 for each item +
per order
An "order" can have multiple items.
Currency is in USD.
We ship to all APO and FPO military addresses.
The FSM C10 Shirt

Wanna hear the story of my truck? It all began way back in 2005 when I became the Editor of Sport Truck Magazine. One of the first things I did back then was to journey from the Sport Truck office in Anaheim, California, 8 hours north to wine country to see a farmer about his truck.

I bought this 1967 C10 short bed for $3,300 bucks, which was too much considering the floors and rockers were rusted, the wooden bed floor was rotten, and when I got home I discovered that the 327 had a piston broken in half. What the hell? It was the right color, had the rare small rear window, and the truck still ran so I brought it home. My friends and I spent the next couple of years building a tube chassis with IRS and swapping an LS2 and 4L65 trans into the truck, complete with 22-inch Boyd wheels as part of a bet with my buddy Mike that I could get my truck on the road and to a truck show before he did the same with his. We both achieved our goals of having running and driving show trucks and then life changed dramatically. I got married, got laid off, made a baby, had all of my wisdom teeth removed without the aid of anesthesia because I wanted to see what it was like, and suddenly my truck became a liability I couldn’t afford. Sadly, I had to sell the coolest project I’d ever worked on.

Fast forward to 2016 and at a truck show somewhere in Ohio (Maybe it wasn’t Ohio, I don’t know for sure!) I ran into the dude I had sold it to nearly ten years earlier. I asked how my baby was doing and he said it had sat under a car cover in the corner of his shop since the day he bought it. He’d done a little work to it but not much. I struck a deal and bought the truck back sans engine and trans. I was so excited to have the C10 back and even more excited to improve upon the original concept! This used to be a cool cruiser; now it’s a rocket with a pickup bed! The old 22s are gone and so is the airbag suspension and automatic trans. Thanks to a unique coilover and hydraulic suspension system, truck still lays flat on the ground when parked but when it’s up in the air it should rail around corners like a badass race car. The LS2 has been replaced with a 650hp LT4 and it’s back by a six-speed manual gearbox.

The 1 week C10 build is going down right now in my garage. After years of neglect we are finally gonna make this thing run and drive. So I'm celebrating and releasing the Official FSM C10 shirt so everyone can join the party.