✓ Open
July 9, 2020
Orders may be delayed slightly, but we are working safely to get you your orders asap. 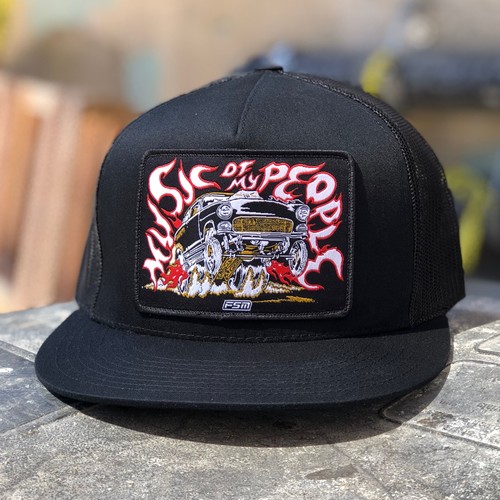 Shipping Info ▾ Size & Product Details ▾
$2 for each item +
per order
An "order" can have multiple items.
Currency is in USD.
We ship to all APO and FPO military addresses.
Music of My People Trucker Hat

The other day I was out for a drive with my friends when we came upon a straight piece of road nested among a forest of trees. The road was not unlike most in the area except for two subtle differences; it had concrete K-rails lining each side of the asphalt and a pillar of lights standing front and center that reminded me of a Christmas tree. I stopped just before the tree and was compelled to put on a smoke show, stabbing the five-speed gearbox into Second Gear, revving the 528ci supercharged Hemi to 6,000 rpm, and dumping the clutch. The Mickey Thompson bias ply slicks fought in vein for traction but quickly gave up and spun until clouds formed within the wheel wells of my ’55 Chevy Bel Air and then were quickly expelled into the atmosphere, pushed aside by dual 3.5 inch diameter stainless steel exhaust pipes.

Once I was satisfied with the relationship between rubber and road, I lifted my right foot off the gas pedal (Yes, Blasphemi has one of those now!), pushed the clutch in again and inched my way toward the dormant tree. I looked to my left and found myself parallel with my nemesis, Bitchin Ranchero. The tendons in my right arm tightened as I shoved the gearbox into First Gear and inched my way towards the tree. Suddenly, light emitting diodes illuminated atop the tree. I mashed the gas pedal, released the clutch and bang-shifted the transmission.

Bitchin Ranchero quickly disappeared into my rearview as the gear changed happened smoothly, quickly and then it happened: There was a scoreboard at the end of that road between the trees because this was no ordinary piece of asphalt.

The board provided confirmation I had achieved a hard-fought goal—Blasphemi had finally run an 8-second quarter mile pass! On September 14th, 2018 Blasphemi tripped the quarter mile lights in 8.97 seconds while traveling 150.9 mph at Atlanta Dragway! Although time seemed to slow down on that day, this was no dream. My straight axle, Hemi-powered, manual-shifted 1955 Chevy Bel Air had finally gone from rusty shitbox to legitimately fast street car during Hot Rod Drag Week, and in celebration of this feat I’m releasing the official “Music of My People” trucker hat.

Of course, immediately after achieving this goal the Hemi broke a valve spring retainer, dropped a valve into the Number 2 cylinder, and destroyed the long block. So, yeah, it was another expensive Drag Week but I still had fun. So buy a hat or ten and I’ll rebuild the Hemi and make it stronger, lighter, and more powerful so that together we can see just how fast Blasphemi can go in 2019.